ways  to  make  a difference

One of our main drivers on Remembering Resistance is to inspire and empower women to campaign for change themselves, drawing on the last 100 years of amazing women’s activism here in the North of England.
​
So what can you do to make a change and make the world a better place for women, and society as a whole?

Find out the gender pay gap where you work @ gender-pay-gap.service.gov.uk

Check out your  MP's voting record on gender issues @ www.theyworkforyou.com 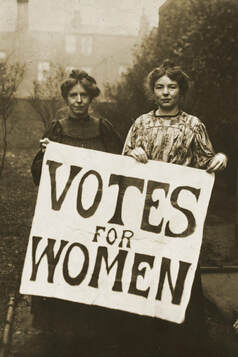 ​Remembering Resistance was inspired by the centenary of the Representation of the People Act of 1918 when some women and all men got the vote. Using your vote is important for many reasons, namely it is the main way you can decide how the country is run. Looking at the way your MP has voted before means you can decide if they represent your views, and this may change how you vote in the future!
​
You can write to your MP for any reason, including asking them to support a campaign that you feel strongly about. You can find more details here.

​As well as many international women’s charities, there are lots of grassroots, local charities which are fighting, advocating and campaigning on behalf of women. However, research in 2013 found that women's rights organisations — despite being a critical resource for women in crisis — are desperately underfunded. You can find local charities both to donate to or, in many cases, to volunteer with.

Whether helping victims of domestic abuse, protecting those whose human rights have been violated, or working to narrow gender gaps in fields like sport, technology and business, the women's charities making an impact in the UK today remind us that while women have come so far, there is always more to fight for, barriers to break down, stereotypes to overturn and lives to be helped.  Get involved with a local charity and do your part to contribute!

Believe that a gender equal world is possible … and settle for nothing less
For more information on any of the material above, you can look at the following websites:-
https://www.bbc.co.uk/news/business-42918951
http://www.equalpayportal.co.uk/gender-pay-gap/
https://www.makers.com/blog/womens-charities-making-impact-britain